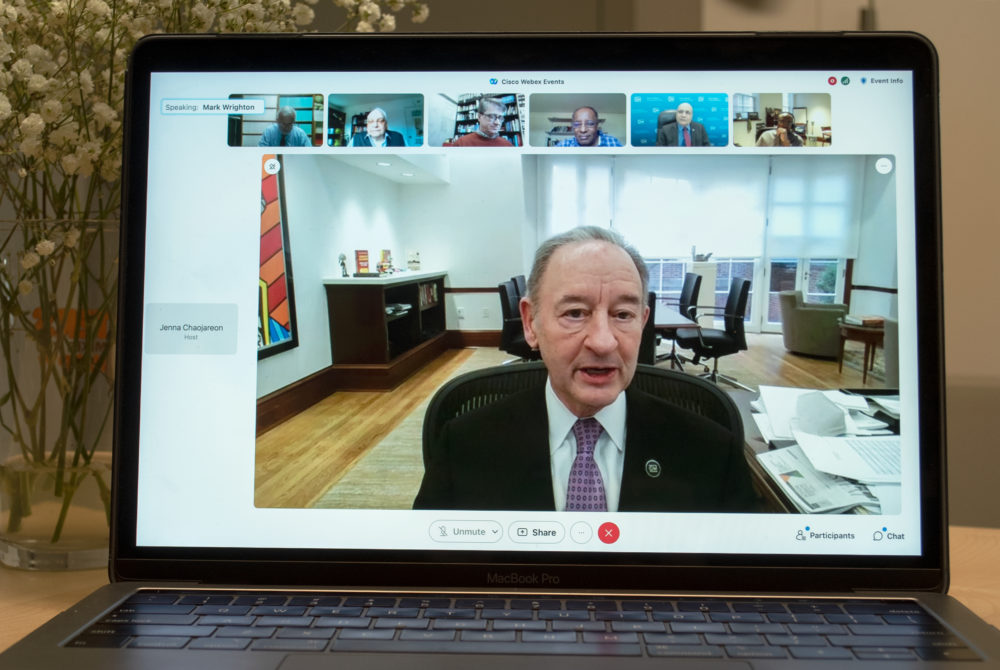 Faculty senators raised concerns Friday about decisions that led officials to track the locations of community members without informing them, revealing new details about data collected throughout the fall to using GW’s 6,000 Wi-Fi hotspots.

A Faculty Senate subcommittee leading the Senate response said it could not verify many details of the data collection effort, calling it a “highly intrusive” initiative that brought ” little” of value. Faculty senators praised the transparency of provost Chris Bracey and acting university president Mark Wrighton, who apologized earlier this month after learning about the now-completed pilot project, but senators said lambasted the lack of notice in the fall, with some viewing it as a mismatch between the academic and financial branches of the University.

Eric Grynaviski, chair of the technology subcommittee of the Senate Education Policy and Technology Committee, told senators on Friday that GW Information Technology conducted the project as part of a free trial with the company. Degree Analytics higher education software.

Grynaviski and other senators blamed GW’s hierarchy, noting that GWIT and the University’s Data Privacy and Ethics Office – which launched in February 2019 – both fall under the purview of Chief Financial Officer Mark Diaz. It remains unclear whether the data privacy office was aware of the project, and a University spokesperson declined to comment on its involvement.

“It’s just been a headache for us trying to figure out why the compliance issues or the ethical obligations to tell people when you collect personal information about them, how that went through the process and then became like a semester-long secret program,” Grynaviski told senators. “We are still confused about this and have not been able to find enough information.”

Diaz did not immediately return a request for comment through a spokesperson.

“We were overwhelmed and somewhat impressed by the commitment to transparency and collaboration expressed by the president and the provost and their concern for the students and their well-being,” Grynaviski said in an email after the Friday’s Senate meeting. “It’s a wonderful sign for the future of GW. [Chief Technology Officer] Jared Johnson and his team also went out of their way to answer hours of questions and make themselves available for follow-ups.

The subcommittee looked at other schools’ IT structures, finding in its report that universities are “increasingly” forming executive committees with representatives from the provost’s, IT and president’s offices to discuss decisions. important. But Grynaviski said GW is an outlier in its tech hierarchy with limited input from the academic side of the University.

“There is no coordinated or organized infrastructure that would help detect problems or discuss the usefulness of programs or ensure that the educational or research mission of the University guides the technology enterprise” , said Grynaviski.

Officials revamped GW’s technology offices in 2020 as part of efforts to cut costs during the pandemic and move administrative functions to a shared services model. Some technology functions previously handled by Libraries and Academic Innovation or individual schools — both of which fall under the purview of the provost — have been consolidated under Diaz, the chief financial officer.

“If you ask me as someone who has been actively involved in the IT effort for over 40 years at GW, it really started with the decision to move Academic IT from the Provost to the CFO store,” Phil Wirtz, said a faculty senator and former chair of the Senate Education Policy and Technology Committee.

Diaz and faculty have had an adversarial relationship since joining GW in 2018. Faculty mentioned Diaz 62 times in their responses to last year’s college leadership survey, but none did. positive way.

Jamie Cohen-Cole, a faculty senator and associate professor of American studies, introduced a resolution on Friday that was referred to the committee in response to the incident.

Grynaviski raised concerns about tables containing billions of timestamped data points with individualized user locations, device names, and descriptors such as gender, residence, type of recovery plan, and location. they were involved in Greek life.

“For the most part, it didn’t reveal anything that would surprise people — that students go away, for example, on Thanksgiving,” he said.

Harald Griesshammer, a member of the education policy and technology committee and an associate professor of physics, called officials’ handling of the data “several significant lapses in judgment.” He said there was a “complete disconnect” between the financial and academic arms of the University, adding that several provost-structured departments had refused to use the data.

Grynaviski said officials had identified a group of six people to determine how best to use the data, but were “struggling to do so,” he said.

“There were costs to privacy, and those probably outweighed the gains from operations,” he said. “And we know that simply because no operational gain has been identified, at least for us.”

Grynaviski warned he wasn’t necessarily alleging “malicious intent” on the part of officials, but said students might not want electronic location logs of their visits to the board or health center. The risks extend to potential employees interviewing for positions at GW under the promise of confidentiality or to people who take part in clinical research, he said.

Degree Analytics, the company GW partnered with to collect the data, released two statements last week which did not directly mention the project at GW but encouraged higher education officials to better inform them about the nature of the data they collect and how it is used. GW’s own privacy policy states that any party acting on GW’s behalf processing community data must make a privacy notice available.

Grynaviski noted that Degree Analytics has a privacy notice that recommends universities maintain transparency when conducting such data collection efforts.

“It states that the University should clearly identify how student location data will be used to improve campus experiences, identify data that will not be used, provide an opt-out opportunity, and provide a feedback opportunity for further development. information,” Grynaviski said. “And the University did not follow any of these principles.”