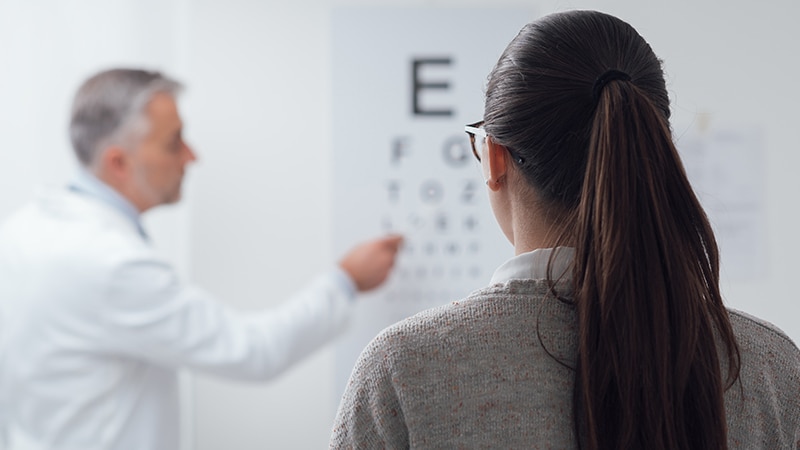 Poor visual acuity, defined as difficulty discerning letters or numbers at a given distance, is associated with depression in middle-aged and older people, new research shows.

After multiple adjustments, analysis of data from over 114,000 participants in the UK Biobank study showed visual impairment was linked to a 19% higher risk of depression.

Additionally, imaging results have shown a significant link between deterioration of brain structures and depression in people with poor visual acuity.

“Early-stage vision screening should be incorporated into the middle-aged and older population to stratify the vulnerable population at risk for depression,” the researchers add.

The results were published online on October 6 in JAMA network open.

To test distance visual acuity, all were asked to read letters on lines running from the top to the bottom of a chart while wearing the prescribed optical correction. Visual impairment was defined as visual acuity less than 0.3 logarithm of minimum angle of resolution (LogMAR) units.

Depressive symptoms were self-reported using the Patient Health Questionnaire (PHQ-2), in which a score of 3 or more indicates depression. In addition, a physician conducted an assessment for depression at baseline.

The association between visual acuity and depression was found in younger (39 to 58 years old) and older (59 to 72 years old) groups, as well as in both men and women.

The researchers also explored the association between depressive symptoms and brain structure using MRI scans of a subset of 7,844 people (51% female; 2% visually impaired).

The researchers note that the supracalcarin cortex is spatially connected to the primary visual cortex, suggesting that the visual cortex may be involved in the pathogenesis of depression.

The links “could be moderated by visual acuity, with increased PHQ score being associated with higher ISOVF levels only in people with lower visual acuity (P = 0.02 for interaction),” the investigators report.

These results “suggest that lower visual acuity was associated with greater depressive symptoms and may have contributed to the related deterioration of the fornix and stria terminalis,” they add.

They note that previous studies have supported the hypothesis that the fornix and stria terminalis are involved in the pathophysiology of other brain conditions, including schizophrenia, bipolar disorder, and autism spectrum disorders.

However, the investigators did not have information on how long the participants had suffered visual impairment, so they could not determine whether the results were affected by time. Additional study limitations cited were that depression can affect vision and that a large proportion of participants (89.3%) were Caucasian.

“This indicates that even mild visual deficits can be associated with depression,” said Vahia, who was not involved in the research.

The investigators validated this association by showing that visual acuity was also associated with neuroimaging markers of depression, he added.

Although the study was not designed to demonstrate causal relationships between mood and vision, and its results do not confirm that correcting visual acuity deficits will resolve depressive symptoms, “the large sample of study and the high quality of the data should give clinicians confidence in the study results,” says Vahia.

“The correction of visual acuity deficits can be considered standard care for older adults worldwide, and this study suggests that providing this standard care may also benefit mental health,” he said. he concluded.