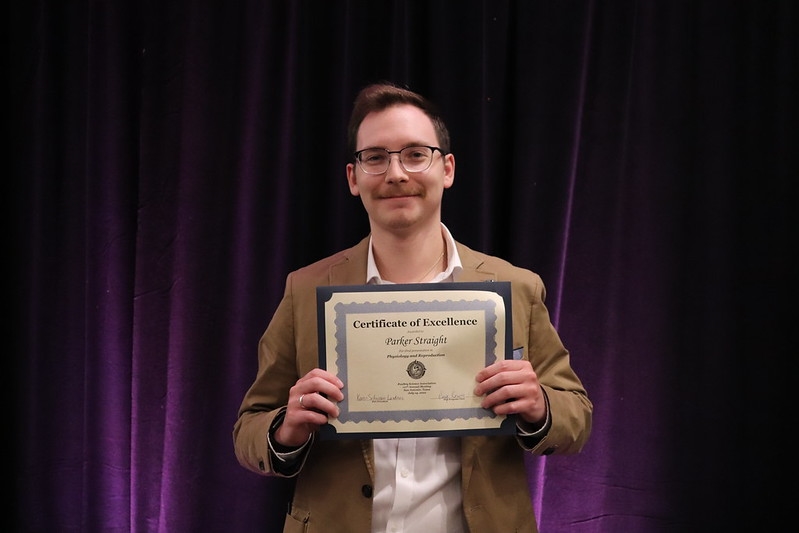 Poultry Science graduate student Parker Straight recently presented his research at the Poultry Science Association Annual Meeting in San Antonio, Texas, and received the Excellence Award for Best Oral Presentation in the field of physiology and reproduction at the meeting.

Neural pathways in a bird’s brain can be very complex, prompting poultry scientists at the Arkansas Agricultural Experiment Station to use 3D imaging technology for research and education.

The Agricultural Experiment Station is the research arm of the Agriculture System Division of the University of Arkansas.

Parker Straight, a graduate student in poultry science at Dale Bumpers College of Agricultural, Food and Life Sciences at the University of Arkansas, recently received the Excellence Award for Best Oral Presentation in the field of Physiology and of reproduction at the annual meeting of the Poultry Science Association in San Antonio, Texas.

Straight and his research team wanted to model the tectofuge pathway, the main visual pathway in chickens.

Two-dimensional visuals can only provide information on an anatomical level within an organism’s brain. Three-dimensional techniques are essential to visualize the complete set of structures, their connectivity and their functions. Straight’s team used histochemistry and diffusible iodine contrast-assisted tomography (diceCT), along with data reconstruction programs such as Brainmaker, Avizo and Blender, to create their interactive 3D models.

“Histochemistry uses chemical reagents like dyes to stain tissues to allow them to undergo image analysis,” Straight said. “DiceCT is very similar to an MRI but uses iodine to stain tissue so that one can delineate clusters of cells from fiber bundles, and this is imaged using x-ray scanners to slice” numerically “the brain.”

The iodine used in diceCT is not permanent and can be removed from sample tissue without damaging or distorting the tissue, which is important for the integrity of 3D imaging.

“The beauty of the techniques we use is that they are reversible and non-destructive and allow you to get more precise spatial and structural data for components of neural systems,” Straight said. “It’s important to maintain the true natural structural formation of the brain to achieve high accuracy of things like relative location, volume, linear dimensions, and connectivity.”

“What these methods can do is allow the generation of complex patterns that can be used in both research and education,” Straight said. “It allows students and people in the field to learn a complex path more efficiently.”

Straight’s research can be applied in a variety of scenarios, he said.

“It’s important to show the application of the techniques I use, because ideally they can be used for other neural systems in birds and other vertebrates,” Straight said.

Straight also presented his research at the International Symposium of Avian Endocrinology in Edinburgh, Scotland. There he was named a finalist for the Early Career Researcher Award for his poster presentation. Both awards were determined by the highest number of ballots cast by all delegates who attended the meeting and voted at the end of the poster sessions.

“I have been overwhelmed with satisfaction and validation for the work I’ve done, and I’ve felt content knowing that the research I’m doing is meaningful,” Straight said.

Straight’s research team included Wayne Kuenzel, professor of physiology and neuroendocrinology at the Center of Excellence for Poultry Science and Paul Gignac, associate professor of cellular and molecular medicine at the University of Arizona. Funding for this project was provided by a Chancellor’s Grant, awarded to Kuenzel and Gignac. Additional funding was provided by an Arkansas Biosciences Institute grant to Kuenzel.