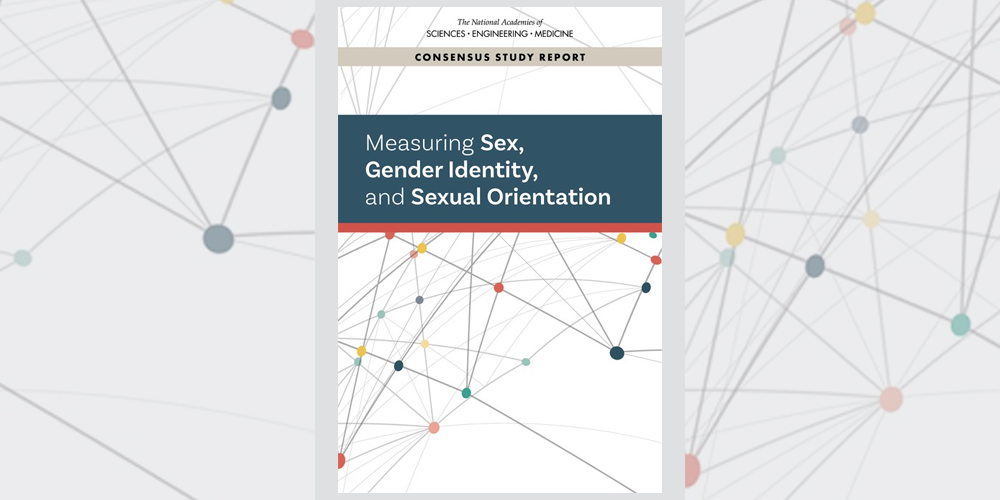 This article was originally published by The 19th.

A groundbreaking National Academy of Sciences report on how best to collect information about gender and sexuality says gender identity, not biological sex, should be the default data collected and reported.

The report, released this month, provides recommendations to the National Institutes of Health on how to measure gender and sexuality in different health settings, including in research, surveys, health care administration and clinical practice. Comprised of 27 different branches, the NIH is the national agency for medical research, as well as the largest funder of biomedical research in the world. Its global influence places it in a unique position to model the collection of meaningful data on gender and sexual minority populations.

LGBTQ+ communities have rarely been represented in general population surveys. This is the first rigorous study of how and when to collect data on sex, gender or sexuality. Without a universal standard, data cannot be combined or compared accurately. For example, one survey may have asked about gender and another about sex, and so they ended up measuring different things.

The report, funded by the Department of Health and Human Services, includes suggested language for survey questions, what data should be collected in what context, and extensive research into privacy issues and how to minimize harm. potential during data collection. Nancy Bates, retired senior methodologist for survey research at the U.S. Census Bureau and co-chair of the committee that authored the report, told the 19th via email that the nine-member committee was made up of researchers who identified with across the spectrum of gender and sexuality. , specifically including Two-Spirit (a broad term to describe the variety of culture-specific Indigenous genders and sexualities), intersex, and gender non-conforming identities.

Overall, the report emphasizes capturing identity rather than biology and highlights the potential for discrimination if data is not collected in an organized and thoughtful way. Since these aspects identify marginalized populations, there is an inherent risk in collecting the data in the first place. In order to minimize discrimination and abuse, it is not recommended to collect all data in all settings.

Many surveys confuse sex and gender, confusing both respondents and analysts trying to draw meaningful conclusions from the data. The report defines sex as a set of biological characteristics, while gender encompasses identity and expression. The panel recommends only collecting sex data in situations where it is explicitly required, such as when a doctor is trying to schedule a Pap test or prostate exam. This is in line with the basic recommendation to collect only the minimum data necessary.

The report outlines a two-step protocol for classifying gender identity: respondents are asked about the sex listed on their birth certificate and about their current gender identity. Previous research has shown that asking questions only about gender identity has led to an undercount of the transgender population. For example, perhaps a transgender woman would identify her gender as transgender, and another would identify her gender as female. The two-step method ensures that both are classified as people with “transgender experience”, which is relevant data in some contexts.

There are also strict privacy protections regarding how data is reported, accessed and used. Many LGBTQ+ people have suffered when their identities have been unwittingly disclosed, and professional groups have highlighted the potential dangers of collecting sensitive data on marginalized populations. The authors conclude that collecting data at the population level is unlikely to cause direct harm to individuals.

The authors note that the harm most likely to result from this method of collecting aggregate data is that the information or benefits provided never accrue to the community in question. They highlight best practices for sharing research findings with communities participating in a study.

The panel’s recommended language for gender identity includes named options for males, females, and transgender only. The limited options were purposely chosen to prioritize aggregation; Given the sample sizes of many surveys, if more specific options were included (e.g., “transgender male to female”), there would likely not be enough responses to both provide meaningful insight and protect the privacy of respondents.

A significant part of the report is devoted to the design of standardized questions on gender, sex and sexuality. Final options for gender include male, female, transgender, and two-spirit (a generalized Western term meant to refer to Indigenous identities outside of the binary gender). However, the option for Two-Spirit to questions about sexuality and gender identity will only appear if the respondent selected “Native American or Alaska Native” as their race.

The decision to show Two-Spirit as an Indigenous-only option is rooted in both cultural competency and data quality. (Bates explained that the committee consulted with Indian Health Services on how to collect data on Two-Spirit people.) As part of the research for this report, a sample of survey questionnaires was evaluated to inform the potential wording and design of questions. One of them was the All of Us survey, an NIH research program gathering various health information. We All included Two-Spirit as an option for sex, and an analysis of responses found that more than two-thirds of people who identified as Two-Spirit did not identify as Indigenous. Restricting choice ensures that data on Indigenous populations is collected accurately.

Another new area of ​​focus detailed in the report is data collection for intersex populations. Few data are available on intersex people or on people diagnosed with gender difference disorder (DSD). There has not yet been a federal population survey in the United States that includes questions on intersex status, and the most comprehensive survey of intersex adults was conducted just two years ago.

Intersex, or DSD, is a broad term that includes anyone born with characteristics of both sexes. Due to the variable nature of the designation and the way it is usually based on clinical data, many people may not know if they are intersex, which complicates data collection. Additionally, many hospitals have historically performed genital surgeries on intersex newborns under the auspices of aligning a child to a binary gender – not always with parental knowledge or consent. In this way, too, it is possible that someone does not know that he is intersex. California is the only state to have condemned unnecessary genital surgery in children.

The committee recommends the collection of data on intersex traits in clinical settings where sex characteristics are needed to determine the course of care. Bates said the committee considered recommended actions jointly developed by the Fenway Institute and InterAct Advocates For Intersex Youth. However, they note that further research into question wording is needed. In particular, it is recommended that a question on intersex status be separated rather than included as an option for sex or gender. This is another example of how the report emphasizes the decoupling of social identity and biological characteristics.

A representative from the NIH Office of Sexual and Gender Minorities Research told 19 that their office is in the process of sharing this information with the organization and the Department of Health and Human Resources. In a public statement shared when the report was released, Dr. Lawrence A. Tabak, Acting Director of the NIH, shared the potential impact on all federal programs. “I hope this report will facilitate the collection of sex, gender identity and sexual orientation across the federal landscape.”