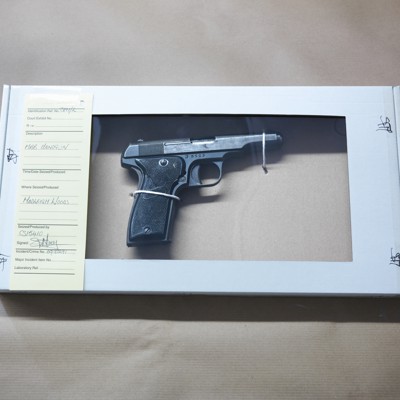 State bolsters analysis of data on crimes committed with firearms

In an effort to identify shootings, disrupt criminal activity, and prevent future violence, Connecticut will establish a Crime Gun Intelligence Center. The interagency effort will immediately collect, manage and analyze in real time evidence such as shell casings of crimes committed with firearms.

Funded by a $700,000 grant from the U.S. Department of Justice, the center will be contained within the Connecticut Forensic Science Laboratory, a division of the State Department of Emergency Services and Public Safety.Gov. Ned Lamont said Connecticut is the first in the country to receive a grant for this purpose.

The center will create an information-sharing interface between Connecticut Forensic Science Laboratory’s information management systems and law enforcement for forensic data on firearms used in crimes.

Participating law enforcement agencies will have immediate access to relevant information associated with leads stored in the National Integrated Ballistic Information Network, a national database of firearm casings. This information will include forensic results and information from national DNA and fingerprint databases, as well as any other case-related evidence established by the original NIBIN official.

“Creating this unified statewide interface will allow federal, state, and local law enforcement agencies and the state’s forensic laboratory to easily share forensic data on crimes committed with firearms in real time, with the goal of identifying those involved in criminal activity and preventing future crimes from occurring,” Lamont said in a statement. “This center will be a collaborative effort and will significantly improve the ability to share factual data.”

Already, the ATF provides investigative leads to law enforcement at all levels through its National Tracing Center, which is the only national facility to track weapons used in the commission of crimes.

But state and local efforts to trace the guns have been limited. Not all law enforcement agencies track firearms confiscated in connection with crimes, and those that do may not collect complete data. In Milwaukee, for example, police track data on firearms reported stolen in the city, but they have not traced the origin of the more than 8,000 firearms confiscated between January 1, 2020 and July 8. 2022, Wisconsin Watch reported.

In February, New York Governor Kathy Hochul announced the creation of an Interstate Task Force on Illegal Firearms aimed at reducing gun violence by investing in tools that will help stop the flow of illegal firearms and will enable multiple states to effectively share tracing data.

Last June, the Baltimore Police Department (BPD) began using the Firearms Trafficking Intelligence Platform to identify illegal firearms and combat firearms trafficking. The tool leverages criminal firearms trace data and ballistics information and other datasets and aggregates and visualizes this information to identify networks, individuals and entities that may be involved in gun crime.

According to Everytown for Gun Safety, a gun violence prevention organization, twelve states require law enforcement to trace every firearm they recover. Delaware, Illinois and New Jersey also require ballistic evidence to be entered into a separate federal database.