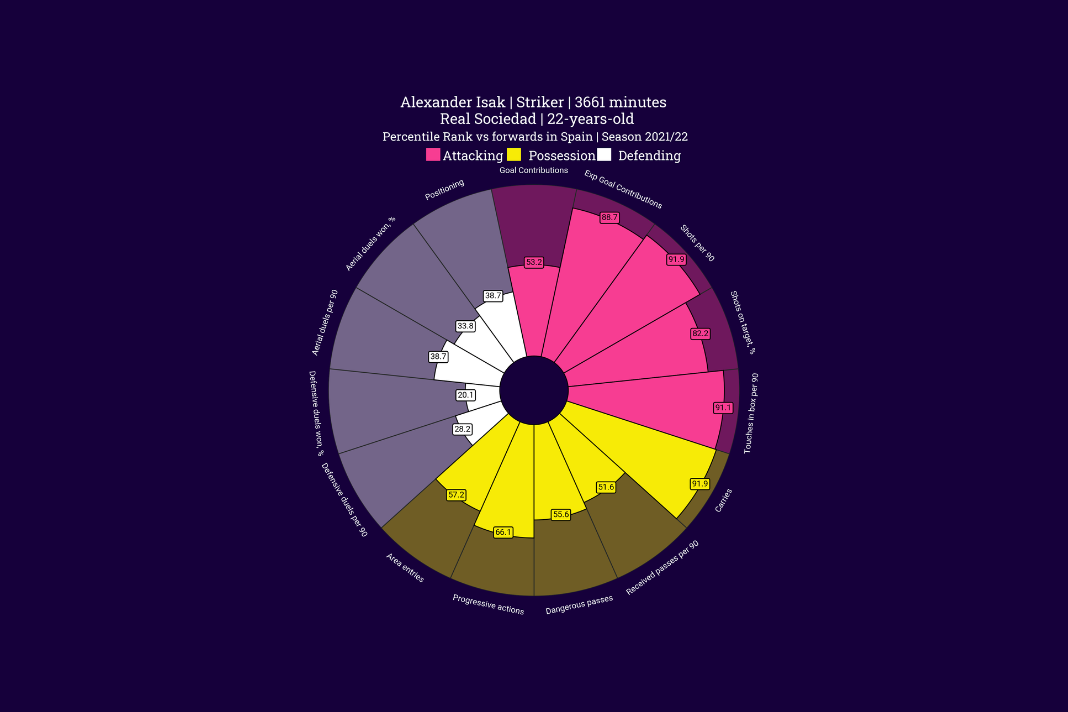 Using xGold to find a replacement for Alexander Isak

Barring a last-minute change of mind from either club or player, it looks like Newcastle United are close to completing the marquee signing of Swedish international striker Alexander Isak from Real Sociedad. It’s a move by Newcastle to finally flex their financial muscle in the market with the price tag estimated at around £60million.

There’s no doubt that in Isak we see Newcastle getting a modern and efficient striker who can add value to Eddie Howe’s side in all phases of the game.

There are, however, of course, two sides to this transfer and Real Sociedad now face the prospect of losing their main striker and goal threat with days to go before the summer transfer window. They will need to weigh the options around their squad and quickly decide if they should enter the market themselves to find a replacement.

Smart teams will already have drawn up succession plans for their players, especially for players they perceive as a ‘threat’ in terms of being targeted by other clubs. However, the reality is that not all clubs are smart in this sense. We have to point out at this point, however, that we have no idea if Real Sociedad are smart or not, they just represent an interesting and current case study.

When it comes to making quick-to-market hiring decisions, the use of data is crucial. Data allows us to cut through much of the noise around football and create bespoke profiles that allow us to target the right players at the right time. Here has Total Football Analysis, we use a custom designed tool for use with our clients called xGold to achieve this. This tool allows us to quickly filter the data to find players who are similar to others from a data perspective. This means we can run a search for Alexander Isak with certain criteria in place and be presented within seconds with a list of players who profile similarly to the Sweden international. We would then, of course, always use a combination of video and live scouting to ensure the data gives us the right players. Data is the starting point, however.

In order to visualize our player data for this data analysis, we are using Wyscout statistics which will be run through Python to create pizza graphs which then show a set of metrics which we use to evaluate attackers. The data will also be converted into percentile rankings, with each player compared against forwards in their own league.

But first, we should look at what Real Sociedad lose to Alexander Isak based on the data from the 2021/22 season. 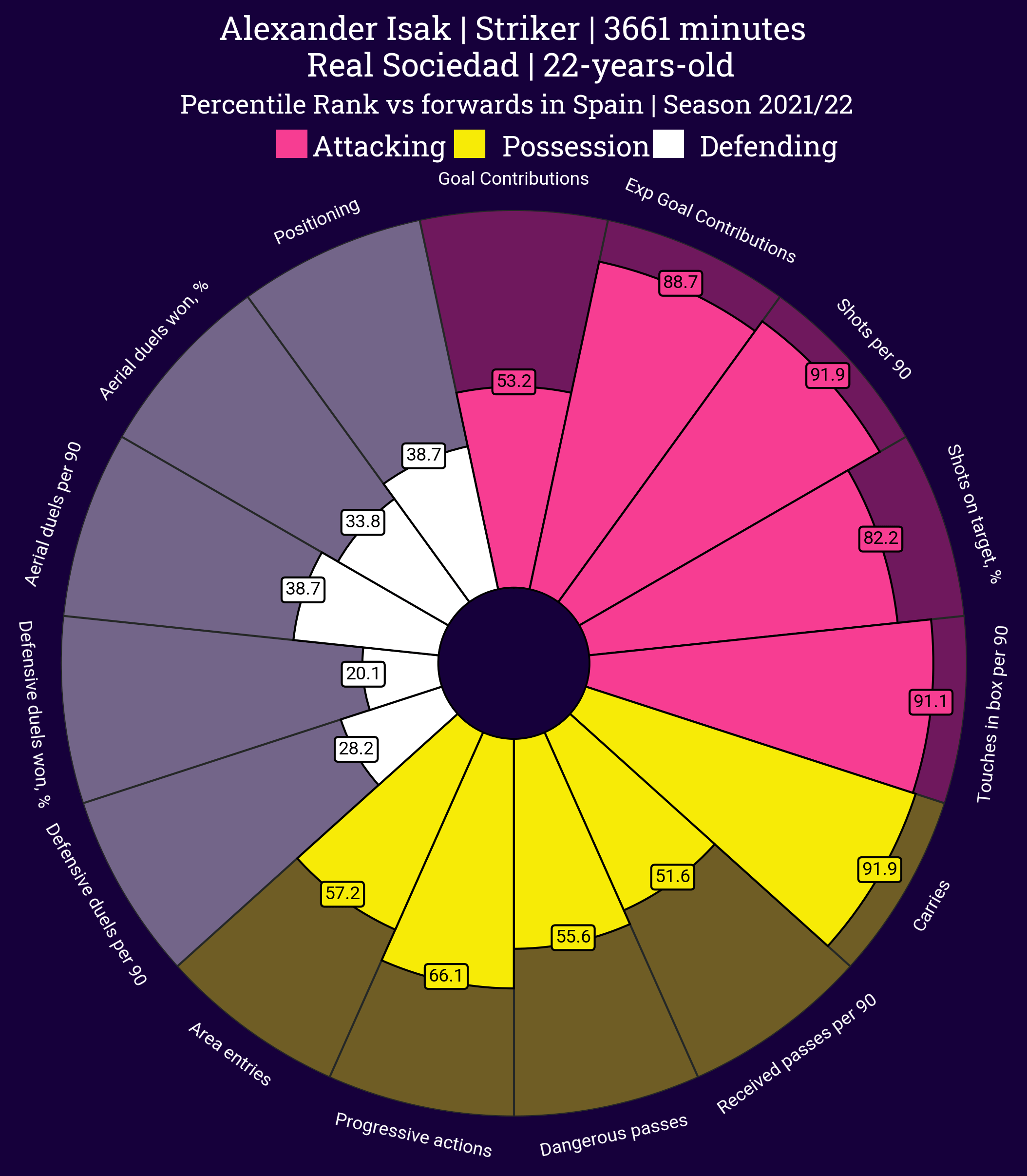 Here are Alexander Isak’s data from the 2021/22 La Liga season where he played 3,661 minutes for Real Sociedad in the league.

Isak is a very modern striker in his approach to the game as he has the ability to go deep and receive the ball either in the middle or in the half-spaces. He has excellent touch with the ability to receive and then hold play or spin to free his teammates into space. However, he can also lead the line and play on the shoulder of the defender in order to threaten the space behind the defensive line.

Although his attacking data last season was very solid, he was also balanced in terms of having a positive output in terms of ball progression at all levels, but especially in terms of runs where he was in the 91st percentile.

Now, let’s break down the three options that xGold thinks could make good replacements for Alexander Isak from a data perspective. 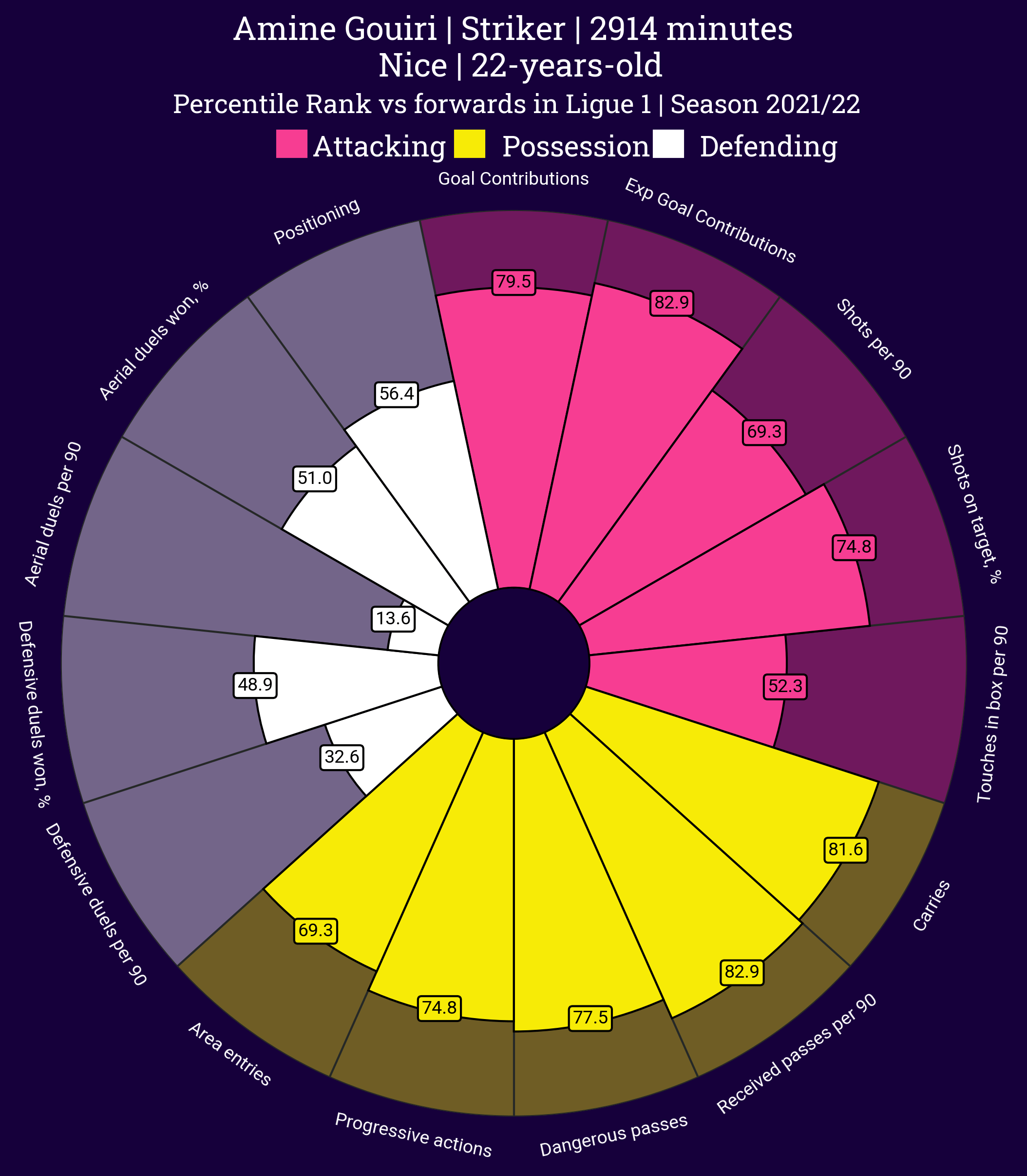 The first player xGold gave us is 22-year-old French striker Amine Gouiri from Nice. Now Gouri is a player who has spent time throughout his career playing as a second striker with a distinct tendency to drift deeper and into half-spaces, but we believe he has the ability to play effectively in midfield as the main striker for a club like Real Sociedad. Gouiri is actually a product of Lyon’s youth academy despite moving across France in 2020 to sign for Nice for a reported fee of around £6.3million.

It is listed at 180cm | 5’11” with an athletic build, so he’s a different player to Isak from a physical point of view, but his tendencies would see him play in similar positions on the pitch to the Swedish striker.

That said, signing a player like Gouiri to play the main striker role would likely lead to a change of role for players around the ‘9’ at Real Sociedad given that Gouiri is particularly stronger than Isak thanks to a fortuitous creation and ball. evolutionary point of view. 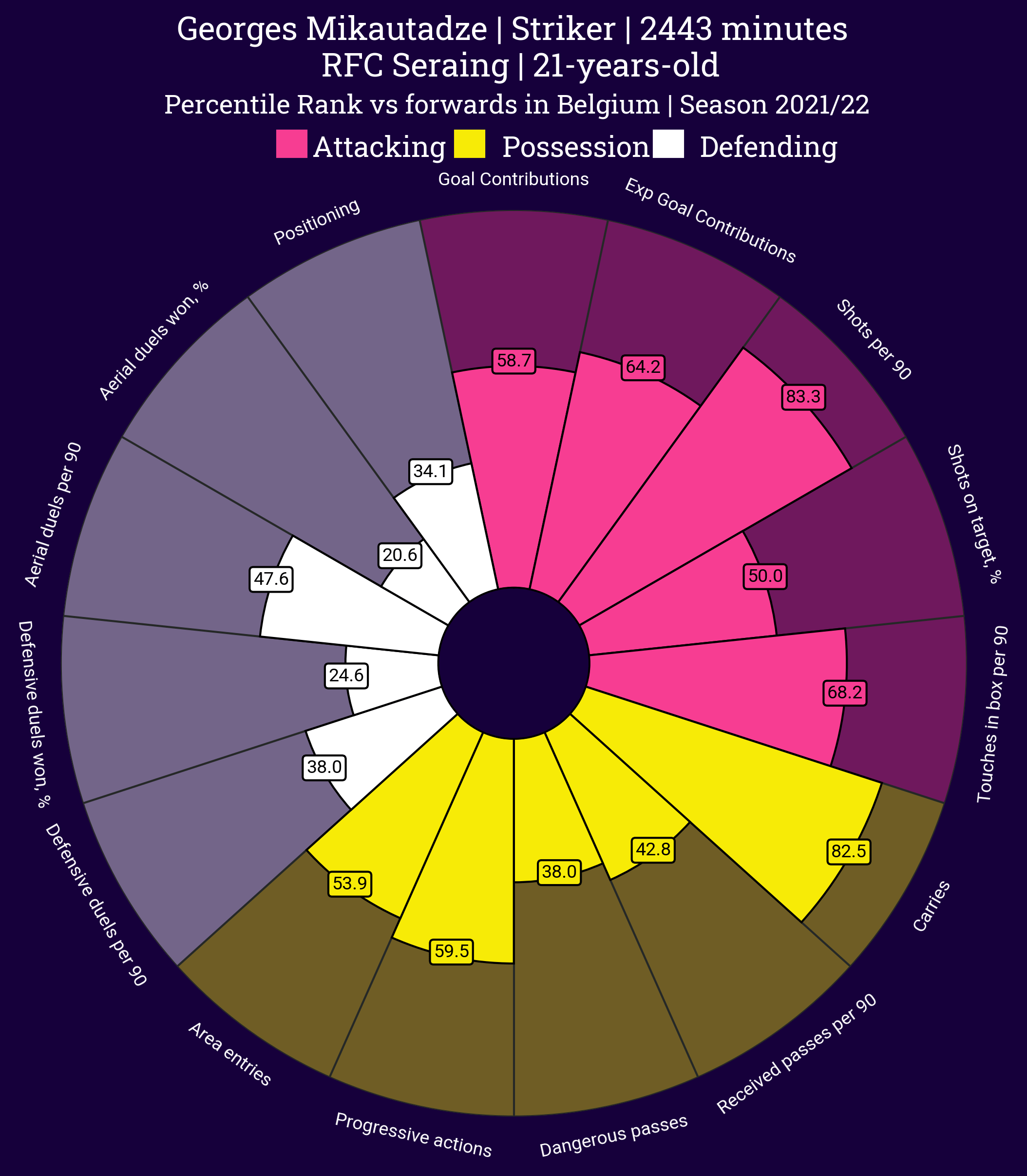 Next on our list is 21-year-old Georgian international striker Georges Mikautadze of Metz in the French second flight. Mikautadze’s data is actually taken from his loan spell last season in the Belgian top flight with RFC Seraing.

Mikautadze has been on an extended loan spell in Belgium after helping Seraing get promoted to the top flight in the 20/21 season. This season, however, he is highly regarded as an important first-team player, with Metz looking to earn promotion from the French second tier. There have recently been reports of the Georgia striker being linked with a move to Burnley, but the English side couldn’t put together a package to entice Metz to complete the sale.

The Georgian striker is an interesting case study as his data should be seen in the context of the club he was playing for. Last season Seraing managed to avoid relegation, but they were a small team trying to adapt to the pressure of playing against stronger sides with more financial backing.

We believe that by playing with better players, Mikautadze has the potential to improve his performance. Indeed, with Metz probably being one of the strongest teams in Ligue 2 this season, their data profile will be much stronger at the end of this season. Early identification of these types of players is an important factor in recruiting. 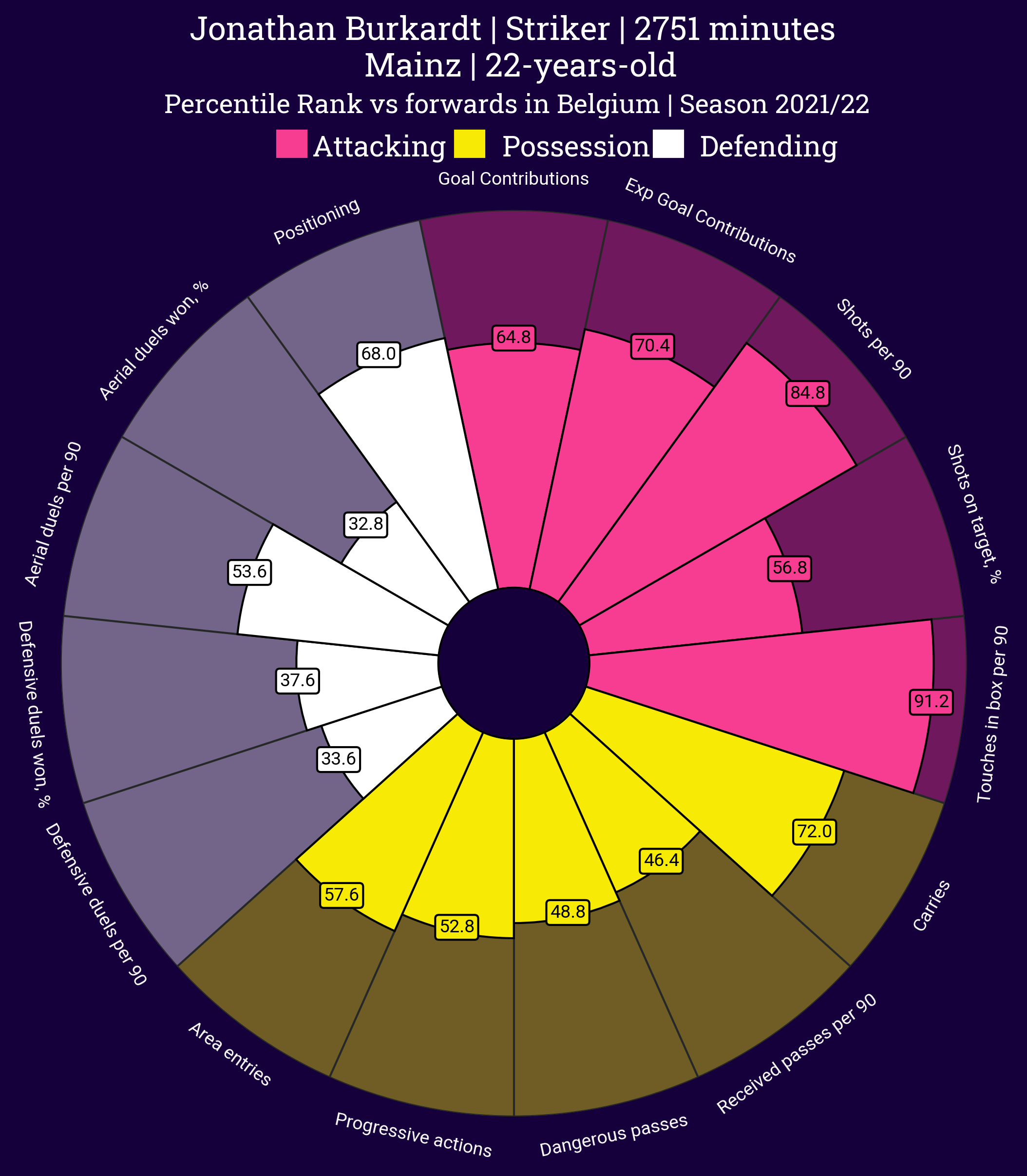 The final player on our list is 22-year-old German striker Jonathan Burkardt from Mainz in the Bundesliga. He is actually a product of Darmstadt’s youth system although he moved at a young age to join the younger age groups at Mainz and he worked his way through the age groups to become a player important to the first team on the German side. He was a regular player and goalscorer for the German national side, having played for them from U15 to U21 level. He actually scored ten goals in 20 caps at U21 level.

Burkardt is a modern striker who is comfortable in a variety of roles and positions on the pitch. He’s physical enough to be comfortable playing and receiving the ball with his back to goal, but he can also spin and run the channels in order to stretch the pitch and attack the space behind the opposition’s defensive line.

So there we have it. Using our proprietary xGold tool, we’ve identified three players in this analysis, all with slightly different profiles, who would represent good choices for Real Sociedad as they face the prospect of replacing a talismanic striker in Alexander Isak.