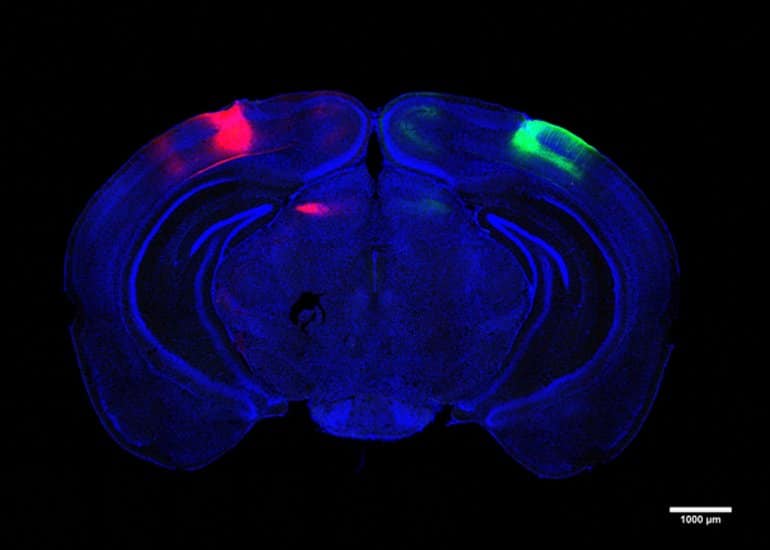 When Alzheimer’s disease damages the cells that cross the hemispheres, visual memory suffers

A new study from MIT reveals that Alzheimer’s disease disrupts at least one form of visual memory by degrading a newly identified circuit that connects the vision processing centers of each cerebral hemisphere.

The results of the study, published in Neuron by a research team based at the Picower Institute for Learning and Memory, derive from experiments in mice, but provide a physiological and mechanistic basis for earlier observations in human patients: the degree of brain rhythm synchronization decreased between the homologous regions of each hemisphere correlates with the clinical severity of dementia.

“We demonstrate that there is a functional circuit that can explain this phenomenon,” said lead author Chinnakkaruppan Adaikkan, a former Picower Institute postdoc who is now an assistant professor at the Institute’s Center for Brain Research. Indian Science (IISc) in Bangalore. . “In a way, we discovered fundamental biology that was not known before.”

Specifically, Adaikkan’s work identified neurons that connect the primary visual cortex (V1) of each hemisphere and showed that when cells are disrupted, either by genetic alterations modeling Alzheimer’s disease or by disruptions In the lab, brain rhythm synchronization is reduced and the mice become significantly less able to notice when a new pattern appears on a wall in their enclosures.

Such recognition of novelty, which requires a visual memory of what was there the day before, is a commonly impaired ability in Alzheimer’s disease.

“This study demonstrates the propagation of gamma rhythm synchronization across the cerebral hemispheres via inter-hemispheric connectivity,” said study lead author Li-Huei Tsai, Picower Professor and Director of the Picower Institute and from MIT’s Aging Brain Initiative.

“It also demonstrates that disruption of this circuit in AD mouse models is associated with specific behavioral deficits.”

In the study, Adaikkan, Tsai, Thomas McHugh and their co-authors discovered and mapped V1 neurons that extended their axons all the way through the corpus callosum, which connects the hemispheres of the brain, to V1 cells on the other side. of the brain.

There, they discovered that crossed hemispheric (CH) neurons forged connections, or synapses, with target cells, providing them with “excitatory” stimulation to drive their activity.

Adaikkan also found that CH neurons were much more likely to be activated by a novelty discrimination task than V1 neurons in general or neurons from other regions strongly involved in memory such as the hippocampus or cortex. prefrontal.

The team took a close look at CH cells and found that they take in incoming information from a variety of other cells within their V1 and other regions of their hemisphere that process visual information.

Given observations correlating reduced brain rhythm synchronization and memory performance in Alzheimer’s disease, the team wondered if this also happened in mice. To find out, they designed custom-made electrodes to simultaneously measure rhythmic activity in all cortical layers of V1 in each hemisphere.

They observed that inter-hemispheric synchrony increased significantly between V1s when the mice engaged in novelty discrimination, but that synchrony, both at high “gamma” and lower “theta” frequency rhythms, was significantly lower in Alzheimer’s mice than in healthy mice. .

Adaikkan’s evidence at that time was strong, but still only suggestive, that CH neurons provided the means by which V1 regions on either side of the brain could coordinate to enable discrimination of novelty, and that this ability was undermined by the degradation of CH cells by Alzheimer’s. ‘ connectivity.

To determine more directly whether the CH circuit played such a causal and consequential role, the team intervened directly to disrupt them, testing the effect of targeted disruptions.

They found that chemical inhibition of CH cells disrupted rhythm synchronization between V1s, mirroring measurements taken in mouse models of Alzheimer’s disease. In addition, the disruption of CH activity undermined the ability to discriminate novelty.

To further test whether it was the cells’ inter-hemispherical nature that specifically mattered, they engineered CH cells to be controllable with flashes of light (a technology called “optogenetics”). When they shined light on the connections they forged in the other hemisphere to inhibit them, they found that this again impaired the ability to visually discriminate.

Overall, the study results show that V1 CH cells connect to neurons in the homologous area of ​​the opposite hemisphere to synchronize neural activity necessary for the correct recognition of novelty, but that the disease Alzheimer’s damages their ability to do this job.

Adaikkan said he was curious to now examine other potential connections between the hemispheres and how they might also be affected in Alzheimer’s disease. He said he also wanted to study what happens to synchrony at other rhythmic frequencies.

About this Alzheimer’s disease research news

These data reveal a previously uncharacterized CH circuit in the visual cortex, establishing a causal link between this circuit and novelty discrimination behavior and highlighting its impairment in mouse models of neurodegeneration.