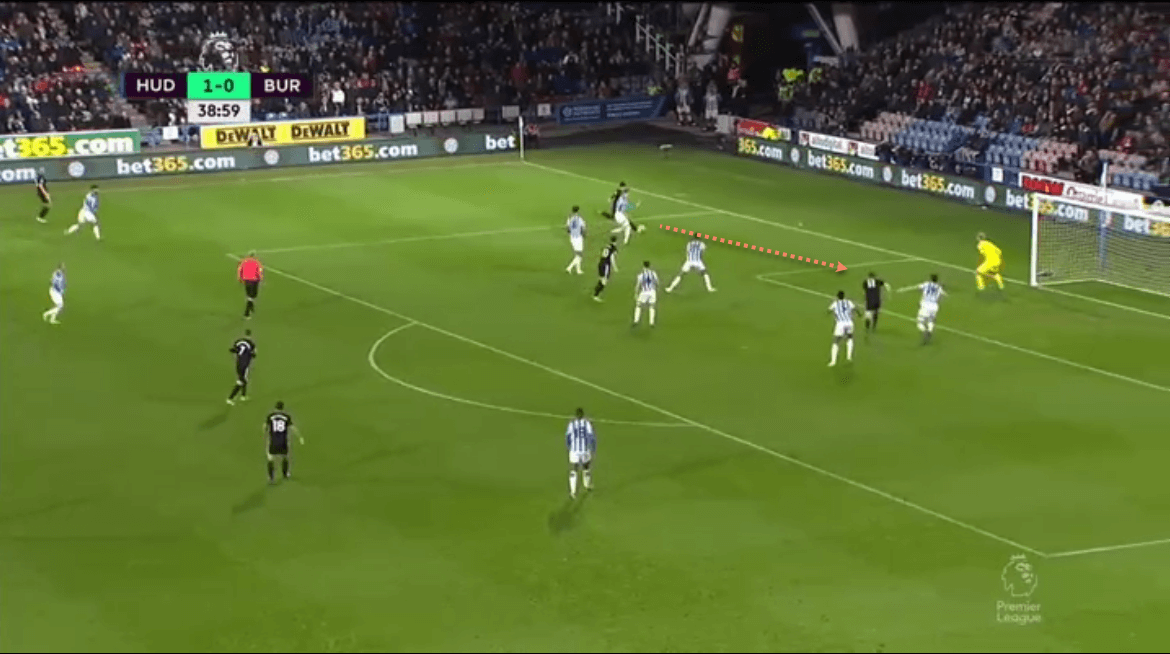 Finding a striker in the modern game is not as easy a process as it might have been in the past. When we think of strikers, we automatically think of scorers and players who ‘come to life’ in the final third of the penalty area and aren’t really involved in other parts of the game.

With greater understanding and differentiation in terms of team styles, however, the role of the striker has changed. Take the English Premier League for example and we immediately see that a striker needs to have different skills depending on the team they are playing for.

At Manchester City, for example, a striker must be able to function as a creative midfielder as they tend to play in such compact forms that interconnecting with teammates is an important part of the role. At Liverpool, the centre-forward’s ability to drop and play in deeper areas is important in terms of creating space for Salah or Mane to cut inside and attack diagonally into the penalty area. Although both of these examples are at the top of the Premier League pecking order, we can look further down the table to see this trend continuing.

Under Sean Dyche, we have seen Burnley develop perhaps one of the most successful playing patterns in the top flight, especially considering the level of spending on transfers and wages at each club. Burnley are a team that receive criticism for their perceived style of play, but their compact form and aggressive, direct style are combined with smart teamwork and recruitment who then target players they believe are suitable for their team and their style of play.

Now Burnley find themselves in a position where they need to find a new striker with the news that New Zealand international Chris Wood has left the club to join Newcastle United, a side battling relegation this season with Burnley. I don’t think Burnley expected to lose one of their most effective strikers in January, but with reports Newcastle gambled £25m for a 30-year-old striker and Wood wanted to make a move for a new challenge, we see Burnley now in a position where they have to try and replace Wood and his exit in a tough window.

In this article, we’ll use our xGold tool to identify four possible targets that Burnley could turn to in order to strengthen their squad. xGold is a custom tool that allows us to find players with similar data outputs to a target player from the world of football.

The first player on our list for Burnley to consider is 26-year-old Scotland international Lyndon Dykes. Dykes, who was actually born in Australia, has been linked in recent days with a move to the top flight in England with Crystal Palace and Newcastle (it’s still Newcastle) reportedly of interest in the striker. Dykes comes off as a traditional target forward who receives the ball well with his back to goal and can bring others into the game as they move to forward positions. However, he also has the pace to run and threaten space behind the defensive line, something Wood doesn’t necessarily have in his game.

Although Dykes doesn’t come across as a prolific goalscorer, he tends to create spaces and opportunities for his teammates as he drags opposing defenders towards him as they attempt to manage his power and threat in the air .

First, we’ll be looking to compare Dykes to Chris Wood in terms of his offensive outings. As you can see from the radar comparison, Dykes’ output is higher in almost every area than Wood’s, with the only exception being a slightly higher percentile rank for Woods in terms of primary goals by 90. It should be noted that neither Woods nor Dykes are looming as forwards. who fire a lot of shots although as you can see on the radar Dykes is higher in shots on target % and goal conversion %. We should of course note that Dykes is playing at a slightly easier level than Woods, but looking at the data above, I think Dykes’ data translates into an attractive option to replace Woods. 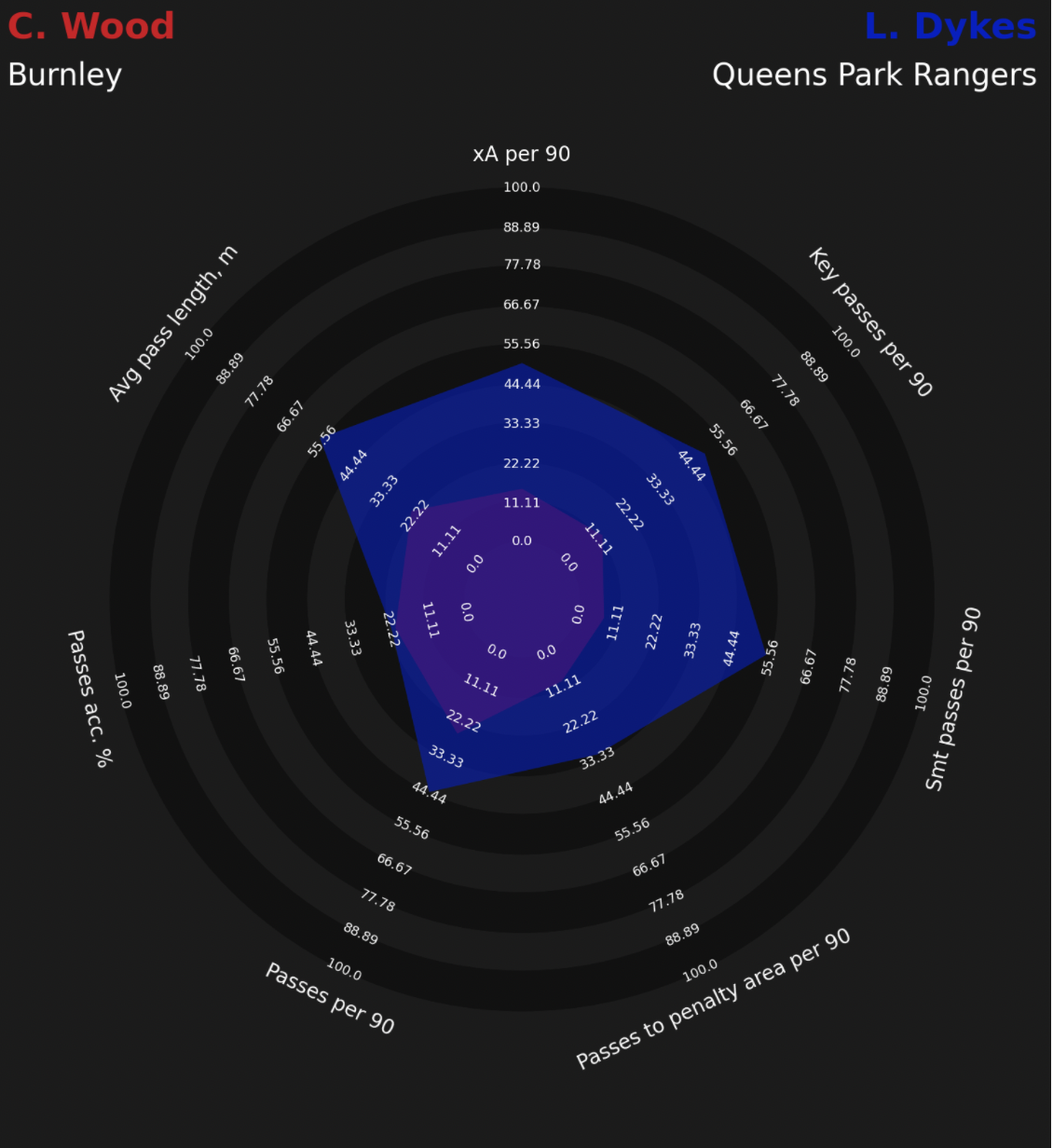 Now we will consider a comparison between Wood and Dykes in terms of passing and progression. As I mentioned above, Lyndon Dykes acts as an enabler at club and international level as his presence and physical profile draw opposing defenders towards him and as a result space is opened up around him. This is reflected in his passing metrics and creativity as Dykes is doing well in terms of key passes per 90 and assists expected per 90. He is a striker who would walk into a club like Burnley and make them better almost immediately. .

Dykes feels like a player who makes a lot of sense for Burnley, he is valued on Transfermarkt at £3.15million with a contract expiring in 2024. There should be room for negotiation here and he would cost less than the charges brought for Woods.

The next player on our list is 26-year-old Senegalese international Habib Diallo. He currently plays in the French top flight for Strasbourg. Diallo followed a well-worn path from Senegal to European football. He grew up at the famous Generation Foot academy and moved to France to join Metz, which has a partnership with Generation Foot, as a youngster. From there he gradually built up a reputation as an effective striker domestically and then in 2020 he moved to Strasbourg for a fee of £9m. From then on he continued to impress to the point that a move to England looks like it would make sense for the striker. 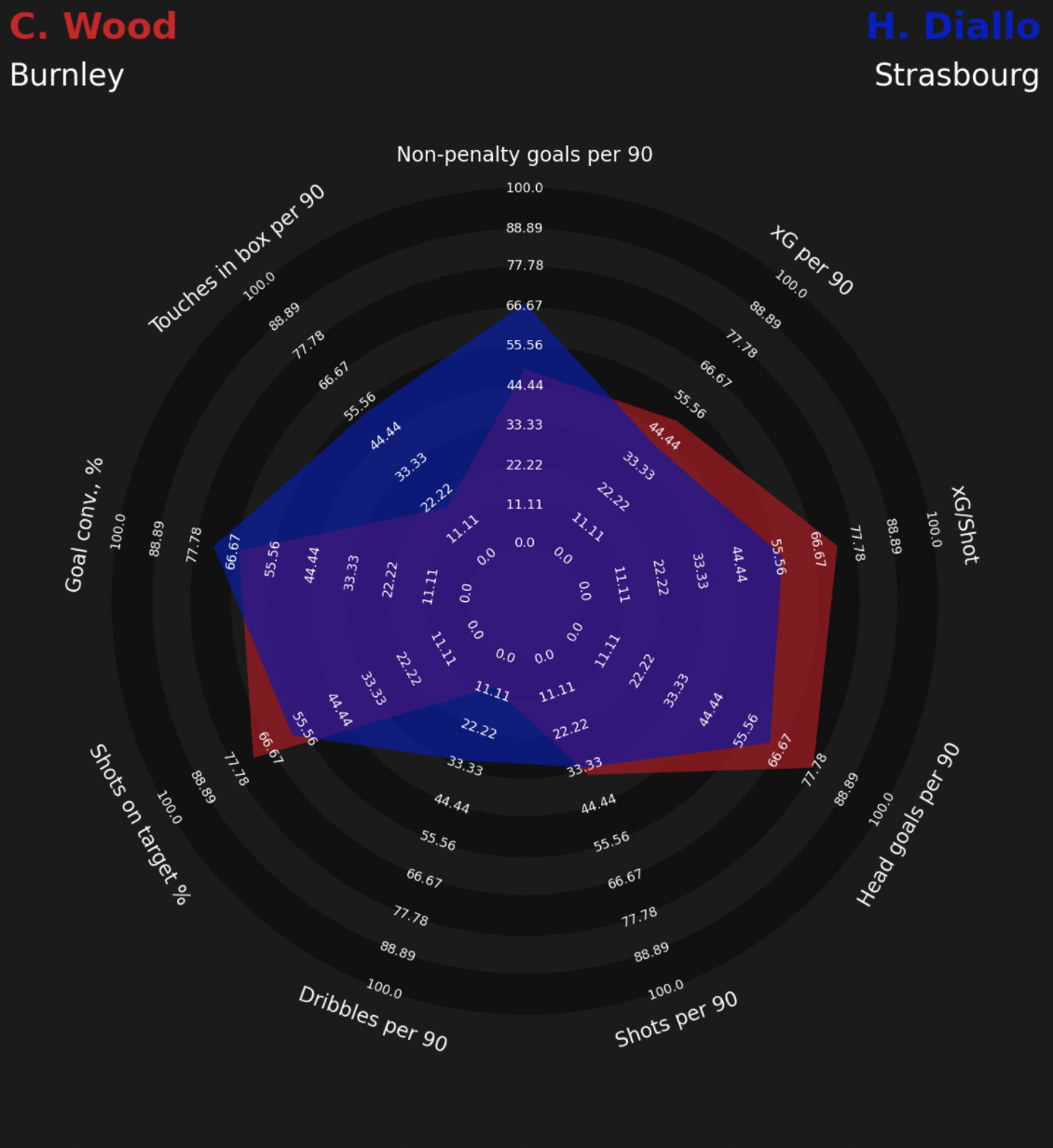 As you can see from the Attack Comparison Radar above, there are certain areas of the game where Woods is actually outperforming Diallo at this stage of the season. Wood leads him in terms of headed goals by 90 and xG per shot while Diallo is slightly better in goal conversion % touches in the box by 90 and xG without penalty by 90. Diallo is, of course, also younger than Wood and has yet to reach his peak years. He’s a striker who can play with his back to goal and, again, he can bring others into the game and create chances in the final third for his teammates. 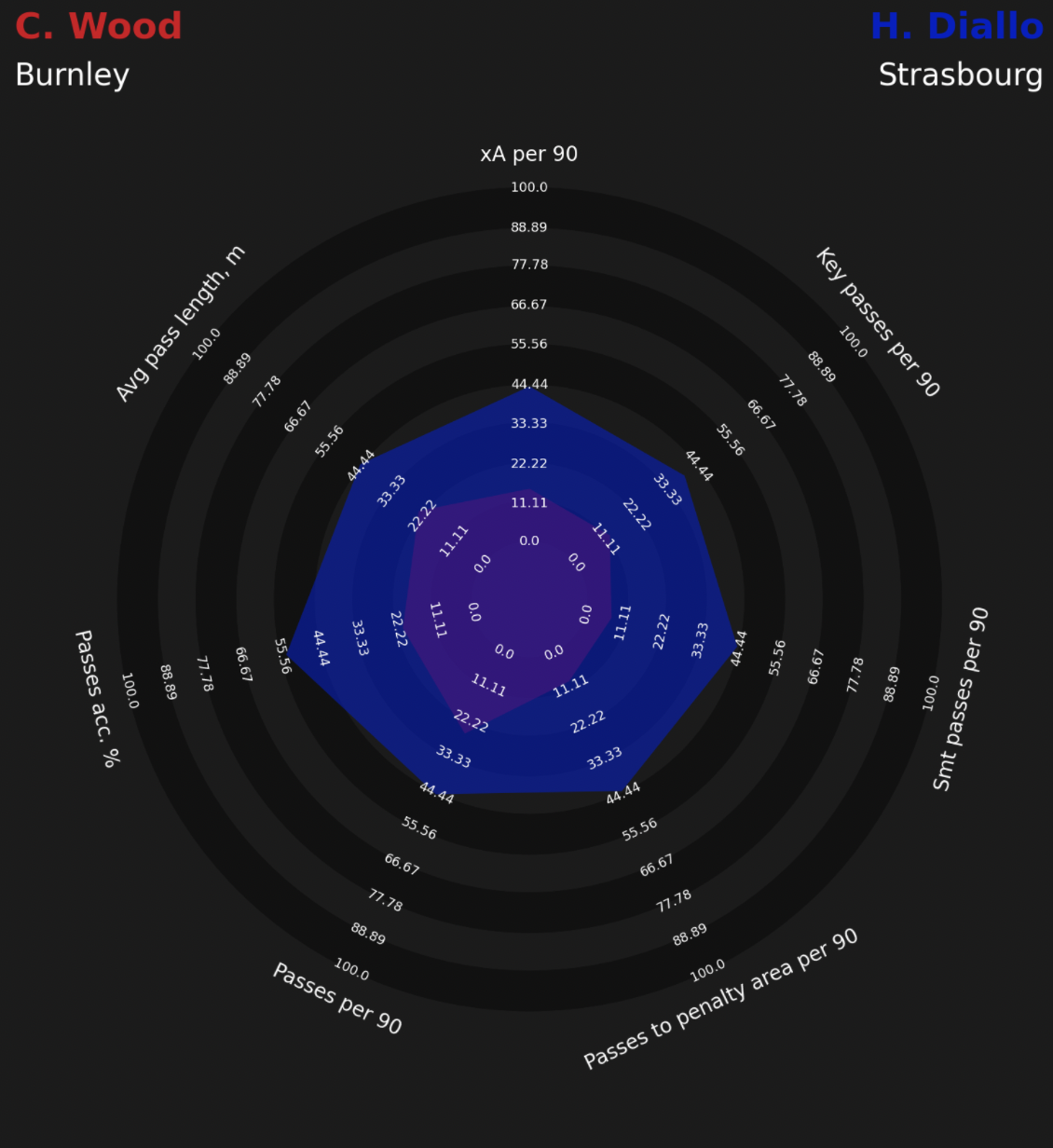 This ability to bring others into the game is exemplified by the radar comparison of Woods and Diallo in passing and progression. Diallo simply provides a better result across the board compared to Woods with an extremely balanced look on all key metrics for the Senegal striker.

While Diallo would probably require a bigger investment, I think he shows more growth potential across the board than Dykes.

The third player on our shortlist is perhaps my pick for a player to come in and immediately replace Chris Woods at Burnley, but improve on what he had. That player is 24-year-old Austrian international striker Sasa Kalajdzik. The tall striker who has 4 goals so far at international level is shaping up to be the type of striker who would immediately fit into Sean Dyche’s tactical approach. His frame and his ability in the air are excellent but he also knows how to set himself up to receive the ball properly with his back to goal. While the Austrian is worth a significant £19.8million on Transfermarkt, his contract only has 18 months to run. This is when clubs need to start talking about quitting a player or looking to sell in order to protect the player’s value as much as possible. 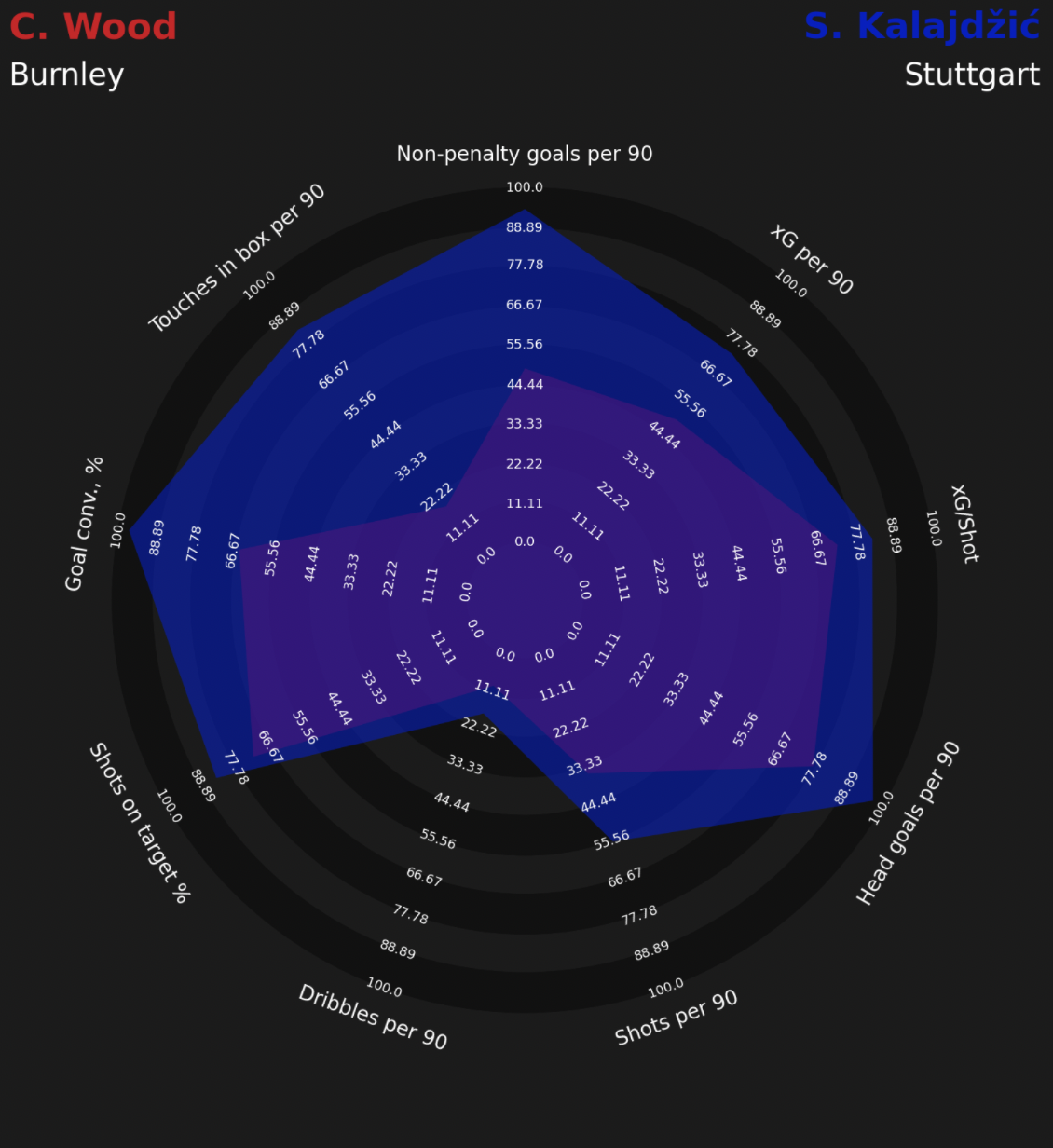 The first thing we should note is that Kalajdzic is playing at a similar level to the Premier League and his production in all key attacking areas is simply better. He’s not just a goalscorer but a striker who can do everything you expect of him in terms of finishing chances, getting the ball in the air and providing an attacking platform from which to his club can build. The only attacking side of the game he doesn’t impress too much in is his dribbling par 90, but Burnley don’t usually ask their centre-forward to carry the ball. Instead, they will be expected to hold the ball and attack crosses. 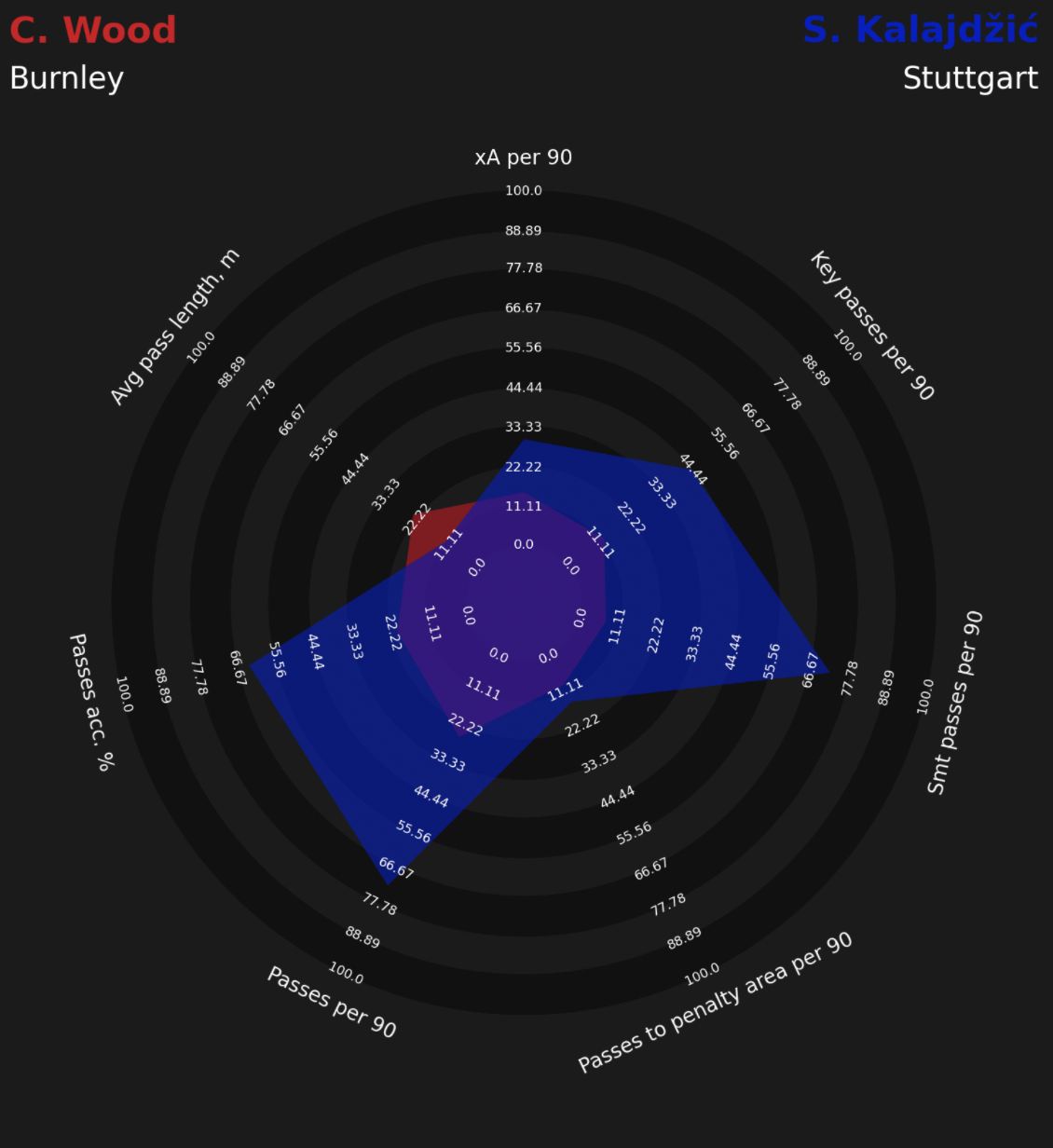 Kalajdzic is less efficient in terms of passing and chance creation than Lyndon Dykes and even Habib Diallo but he still registers stronger outings than Chris Woods in those areas.

With Kalajdzic’s contract situation at VfB, Stuttgart now seems like the right time to approach them over a potential deal for the Austrian striker.

Finally, we have the youngest player on our shortlist in 23-year-old Guinean international striker Mohamed Bayo of Clermont Foot. He helped his side to promotion to Ligue 1 last season and his performance so far this season has been a big part of the reason the relatively small side have had no trouble keeping themselves in the league. elite. He’s a striker who comes to life in the final third and especially in the penalty area and he combines the ability to play with his back to goal with a willingness to run and attack the space behind the opposing defensive line. 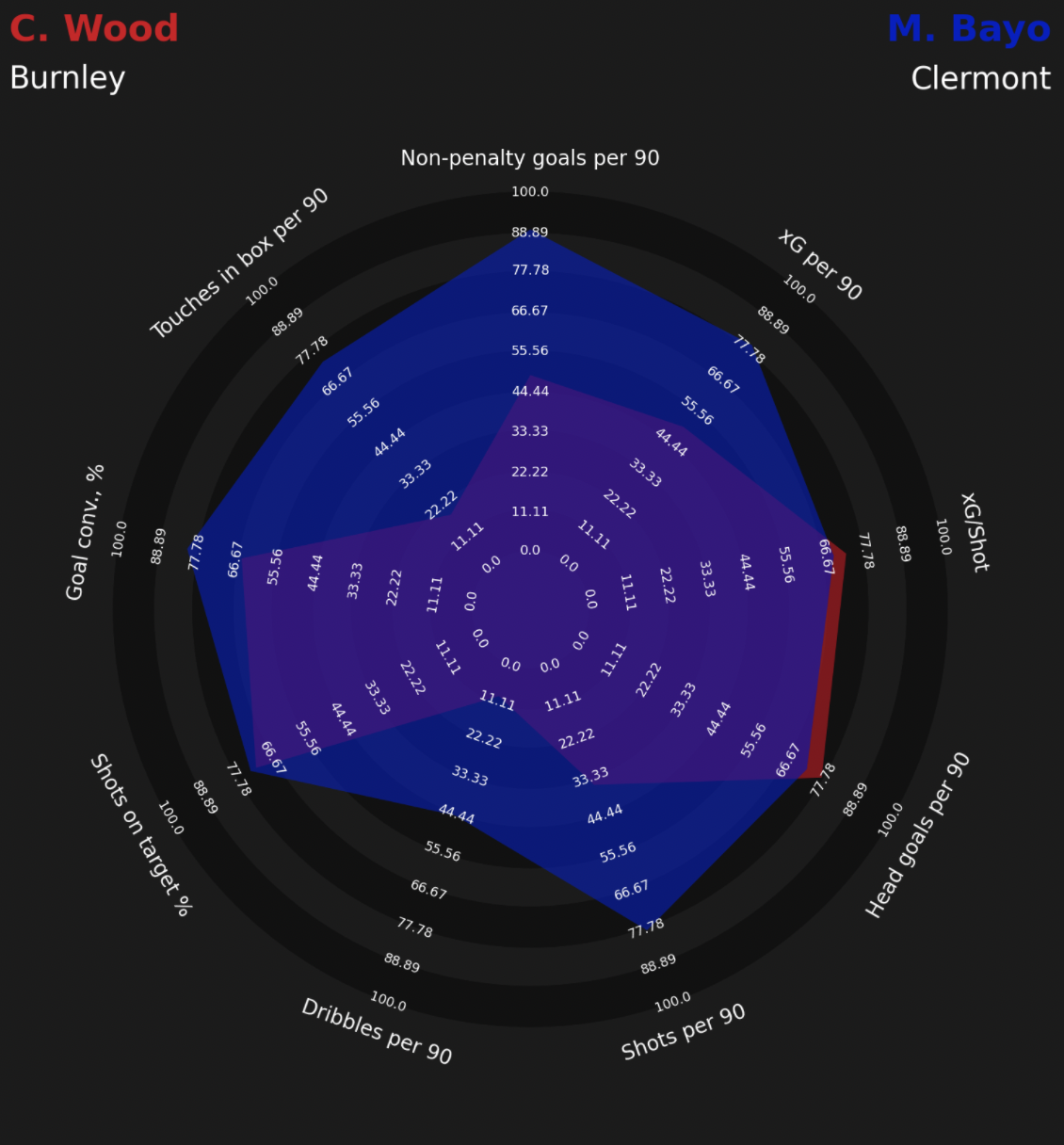 While Chris Woods tops him in terms of headed goals by 90 and xG per shot, it’s clear that Bayo tops him on all other metrics as the Guinea striker is a shooting monster who maintains a strong goal conversion despite a relatively high rate of fire. to goal. 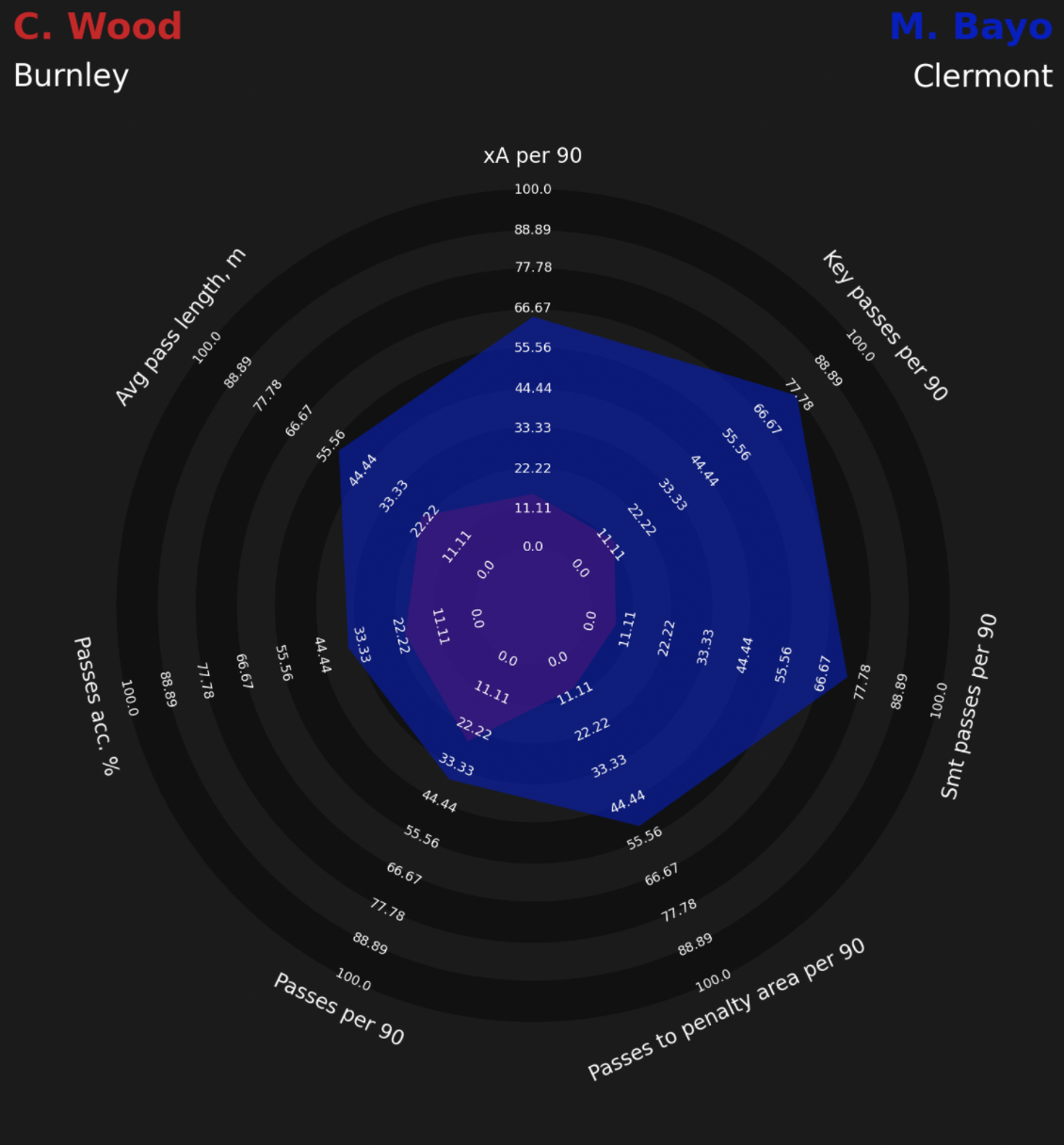 Once again we can see that spurt creation and passing are not strong points for Chris Wood, although some of that has to do with Burnley’s style of play, and Bayo impresses with his spurt of creation with relatively high outtakes for key passes by 90 and xA by 90. as he creates good chances for his teammates through his combined play in the final third of the pitch.

Bayo would rank second in terms of players on the shortlist I would prioritize for Burnley to target to replace Chris Wood and his production in terms of data.

This would be the order in which I would go about signing a player to replace Chris Woods at Burnley on our shortlist. I think the first two give the most value in terms of the growth they both have in their game as well as having significant resale value down the road.